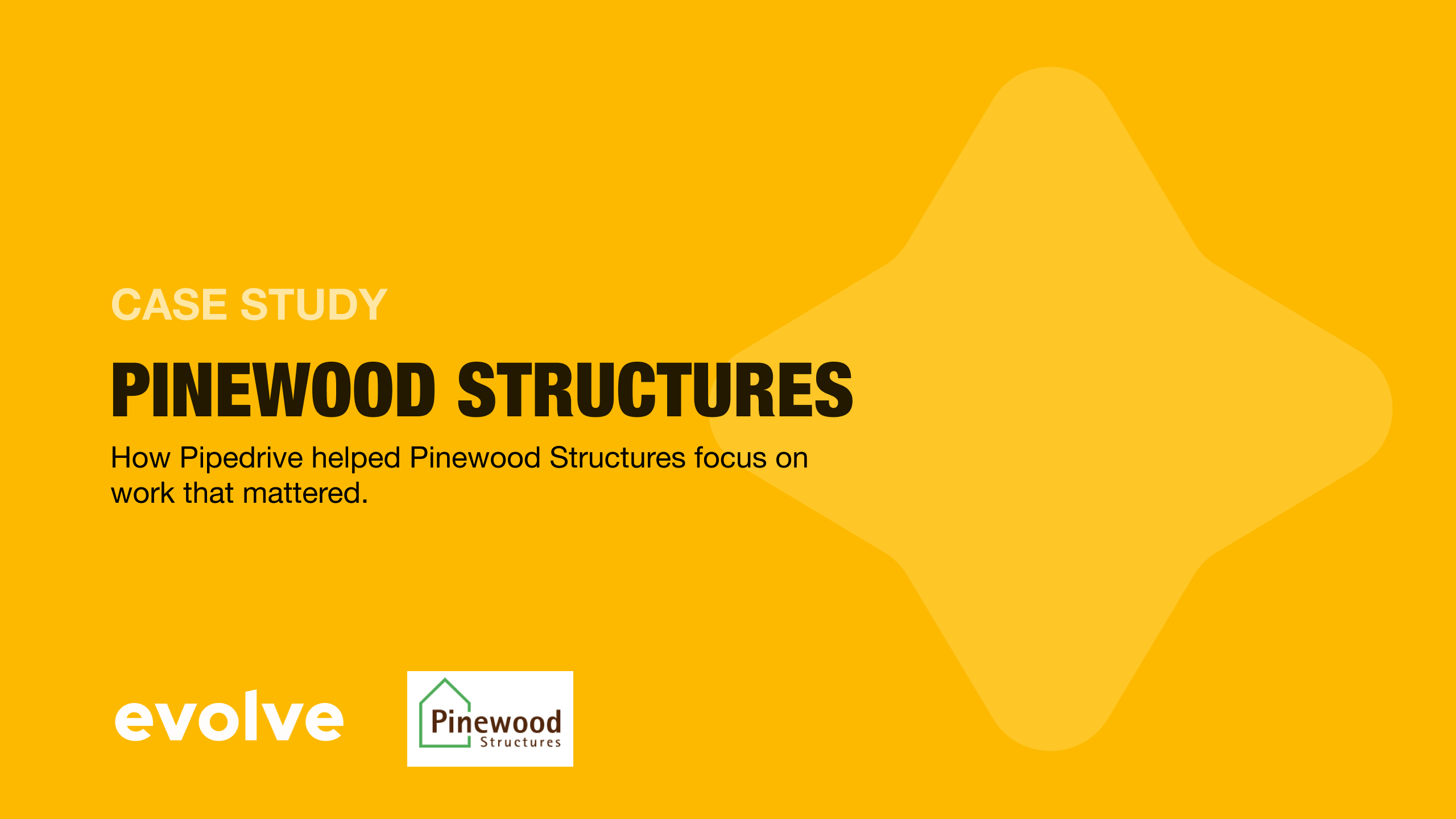 Posted on
May 6, 2022
Read how Pinewood Studios used Evolve’s Launchpad service to help get their business up and running on Pipedrive.

As the Sales and Marketing Director of Pinewood Structures, Peter Keogh needed a CRM system that would help him clearly understand how the business was performing.  He’s tasked with managing a team of salespeople to consistently grow revenue but realised that their current system wasn’t fit for purpose and was holding them back.

Peter’s challenge was that they were stuck using an old and outdated CRM where it wasn’t easy to get the data he needed for reports and sales forecasts. Information and processes weren’t documented, instead they were landlocked inside of people’s heads. It was important for him to find a way to systemize the sales process in a CRM so that the team had a single source of truth.

Learn more: The All-In-One Sales CRM for the Construction Industry

After researching and exploring several other software tools, Peter settled on Pipedrive as it met his requirements of ease of use, price point and functionality.  He found that “Pipedrive is exactly what we need, it’s just super straightforward. It’s straightforward to update, easy to customize and it gives the outputs that I need.”

We sat down with Peter to learn about how Pipedrive has helped give him the clarity he needs to make data-led decisions with confidence.

On choosing the right CRM

Peter did his own research to compare several of the other main CRM’s. He knew that he wanted a sales focused system and that was one factor that made the decision to choose Pipedrive easy. A key question to ask yourself when choosing a CRM he found is to really focus on ‘what you need it to do, what are your use-cases’. Because there is so much choice, you can end up with a system that does everything and you only use a small number of the features, or you have a system that is too granular and bespoke and so it doesn’t have enough flexibility.

“Being able to have clear, concise, accurate information is priceless.”

Peter describes his process as follows: ‘I spent a lot of time working out what I didn’t know, and then working out whether I needed to know it. And then once I got it down to five key criteria that I wanted, it was pretty clear to me that Pipedrive was probably the place to go.”

How Evolve helped him navigate his ‘Unknown Unknowns’

Along his research journey and throughout the implementation of Pipedrive, Peter leaned on the team at Evolve to help him cover his blindspots, the things he didn’t know he didn’t know.

Speaking about the partnership with Evolve Peter had this to say: “Bruce and Aaron were good guys. They gave me the confidence to go into something that I didn’t know about because I hadn’t looked into CRM systems before. So having people there that you felt you could trust if something came up and they wouldn’t take advantage of you if you made a mistake, that gave me peace of mind. You knew they were on your side.”

The impact of Pipedrive

Peter set up the right processes and structures on the system to make sure he got the most out of Pipedrive. He said that ‘the biggest impact on the business has been the ability to get real visibility and real confidence in what the sales team are doing. It would have been much harder for me to get that clarity with the old CRM. So being able to have clear, concise, accurate information that I can present to the business to show our pipeline and visualise not just the number of opportunities at these stages, but the value of opportunity of these stages is priceless. We’ve been able to give the rest of the business more confidence in what the sales team are doing and how they’re doing it.

For Peter the difference between Pipedrive and their old system is night and day. Now he has easy access to reports and intelligence, clear processes and structure and is confident that he has the best tool for the job. This translates into him being able to spend time on initiatives that will help grow the business. For instance, he’s now writing case studies in a fraction of the time it would have taken in the past. In fact he said “I’ve been able to dip in and quickly find the information I want from Pipedrive where in the past it was a nightmare, I probably wouldn’t have done the case study before because it would have just taken too much time”.

Only just scratching the surface of what Pipedrive can do

Peter uses Pipedrive mainly for analysis and creating reports and knows that there’s still a lot more the team can get out of the platform. Even relatively small changes like using and customizing filters can ‘‘save say 10 minutes and add up to make a real difference.”

The simplicity and ease of use of the platform is a big selling point but Peter’s aware that Pipedrive are proactively trying to keep up to date. Whether that’s with 3rd party integrations or new native functionality like Campaigns.

And when you’ve invested as much time and energy as Peter has into leading a digital transformation project, it’s good to know that “Pipedrive feels like it can grow to meet the demands of the business.”

Pinewood Studios used Evolve’s Launchpad service to help get their business up and running on Pipedrive. Interested in learning more about how we can help your business, get in touch and let’s book in a free consultation. Or you can always try Pipedrive for yourself  with a free 14 day trial.

Markus Leming, co-founder and Head of Product at Outfunnel took us through some of the most popular ways that sales and marketing teams use Outfunnel.

We know first hand just how impactful Pipedrive can be to SMEs and scale-up businesses who have lofty sales targets but might not know how they’re going to reach them without making a change. Or the business that is chasing operational efficiencies and is tired of error prone manual data entry.

Our team specialise in getting the most out of Pipedrive. We implement, consult and train, all things Pipedrive, building integrations between apps, automating your processes, and helping you to manage your data. We work with the best sales and marketing apps to generate leads, drive growth and reduce manual work.

Evolve Your Business
Automate, Integrate and Optimise everything you do in Pipedrive
Book A CallAbout us

Ready to get going?